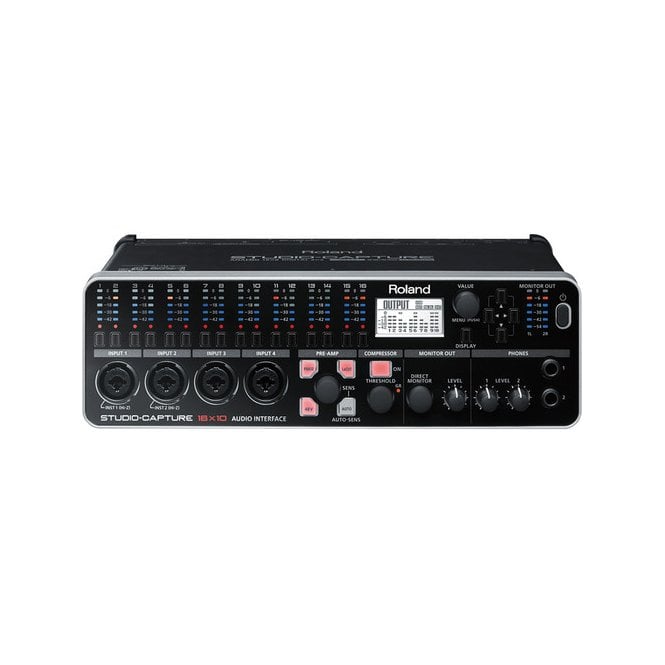 The Studio Capture USB Audio Interface from Roland is a 16-channel input and 10-channel output USB 2.0 audio interface designed for tabletop use in home studios, permanent installation in professional studios, or for travelling production needs. It is capable of resolutions up to 24-bit/192kHz and features 12 of Roland's combo XLR/TRS VS microphone preamps, four of which are located on the unit's front panel, as well as four 1/4" TRS line inputs. Additionally, the Studio Capture has eight 1/4" TRS line outputs and two XLR monitor outputs. For even more routing flexibility, the Studio Capture includes coaxial digital and 5-pin din MIDI inputs and outputs.

Each input channel on the Studio Capture features an independent compressor, low-cut filter, phase invert, and 48-volt phantom power. Roland's AUTO-SENS feature allows the unit to automatically set levels for your inputs without the need for tweaking and re-adjusting as you track. The unit can be used on a tabletop or rack-mounted with the included rack-mount ears.

Combining audio performance, flexible I/O, and a mobile design, STUDIO-CAPTURE is designed to be a recording solution for musicians, composers, and recording engineers. It can be used for traveling production, tabletop use in home studios, or permanent installation in commercial studios with the included rack ears. The 16 audio inputs, 12 mic preamps, and flexible monitor mixing allow you to track bands without adding any additional hardware. You can also simultaneously connect multiple synthesizers and other devices in large-scale composing setups. To take on larger projects, you can expand your I/O to 32 inputs and 24 mic preamps simply by adding a second STUDIO-CAPTURE

STUDIO-CAPTURE is equipped with a total of 16 input channels and 10 output channels. With the combo jacks, each of the 12 XLR mic inputs can alternately be used as a balanced or unbalanced 1/4" line input, while inputs 13 to 16 have their own dedicated rear-panel TRS jacks. Inputs 1 and 2 can be switched to Hi-Z operation for connecting guitars and basses directly, while inputs 15/16 can be assigned to the coaxial digital input. 8 analog outputs are provided on TRS jacks, with the main stereo outputs mirrored on XLR jacks. 2 additional outputs (9 and 10) are available via a coaxial digital jack. STUDIO-CAPTURE also features MIDI I/O, with Roland's proprietary FPT processing for high-speed performance

STUDIO-CAPTURE offers high-resolution, 24-bit recording at rates up to 192 kHz, with stabile low-latency USB performance provided by Roland's proprietary VS STREAMING technology. All current Mac and PC DAW platforms are supported through ASIO 2.0/WDM (Windows) and Core Audio (Mac) drivers. With VS STREAMING, you can expand your I/O by using two STUDIO-CAPTUREs on the same USB bus without compromising stability or audio quality

AUTO-SENS: Levels at the Touch of a Button

Unique to Roland's CAPTURE family is the AUTO-SENS feature, which allows you to set input levels automatically. Just press the dedicated front-panel button, play your connected instruments, and STUDIO-CAPTURE automatically sets the recording level for each input

Bright, responsive LED meters let you keep an eye on levels for individual input and output channels as well as the MONITOR OUT, while dedicated input channel buttons and other controls make it easy to navigate the built-in display. The MONITOR OUT section features a dedicated LEVEL knob for control room volume, plus a DIRECT MONITOR knob for listening to selected input signals. 2 headphone jacks-each with their own level knob-allow a musician and engineer to monitor at the same time without additional hardware

Beyond traditional audio interfacing, STUDIO-CAPTURE offers four independent Direct Mixers for zero-latency monitoring, operated via the software control panel. Powered by STUDIO-CAPTURE's internal DSP, each mix can be routed to any of the outputs, perfect for sending custom monitor mixes to headphones, speakers, or recording devices. Mix configurations can be saved for later use, providing quick setups for many different applications. A reverb processor is available for monitoring, allowing singers and instrumentalists to record dry tracks while listening to ambience effects