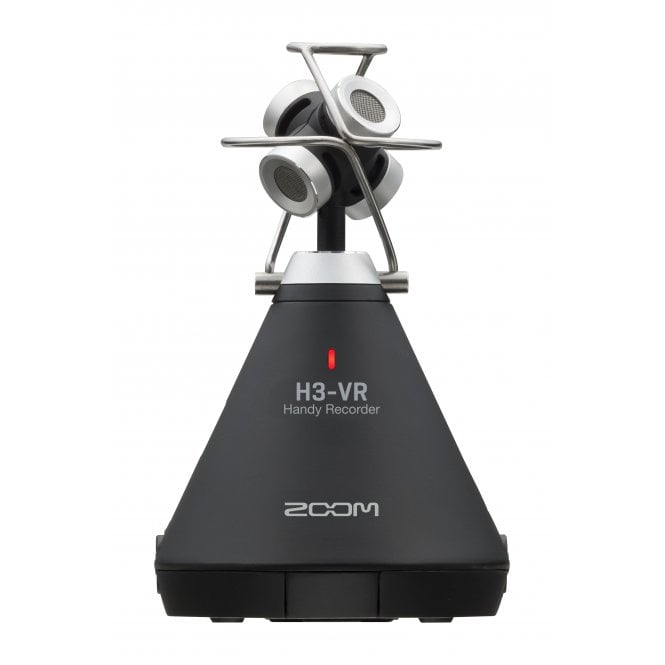 The Zoom H3-VR virtual reality audio recorder is the complete solution for capturing and processing spatial audio for VR, AR and mixed-reality content. With a built-in Ambisonic mic, recorder and decoder, the H3-VR puts 360-audio in the palm of your hand.

Audio For Every Reality

The H3-VR’s 4-capsule Ambisonic mic captures precise 360-degree VR audio recordings up to 24 bit/96 kHz. And without ever connecting to a computer, the onboard decoder allows you to export Ambisonics B-format files directly.

The H3-VR even offers standard stereo recording for recordings that will be played out of speakers rather than headphones.

Free to download, ZOOM Ambisonics Player software can easily convert Ambisonics audio to a 5.1ch surround file that is pre-aligned to the proper speakers, and is exported to your video or audio editor for syncing with standard video.

The H3-VR also enables you to live stream events in 360 degrees so that wherever your fans are, they’ll have access to the best seats in the house.

The H3-VR’s compact, conical design captures audio from multiple angles without getting in the way of the camera or the action.

Auto Mic Position and Level Detection make placing the H3-VR simple. Whether positioned upright, upside down, endfire or endfire inverted, the H3-VR automatically calibrates so your audio and video are already aligned for post.

The slam of dungeon doors, growl of monsters or howl of the wind can make or break a player’s fantasy. With the ability to capture high-quality in-game audio, you can elevate your player’s experience to new levels.

The H3-VR’s line out volume control lets you adjust the output volume to a DSLR camera, additional headphone, etc.

A dedicated headphone jack allows for stereo binaural monitoring of your audio while recording.

A directionally-responsive LCD screen provides a bright, clear display even when upside-down.

The Home, Play/Pause, Forward, Reverse and Menu buttons are positioned for quick access.

Lock your settings on the H3-VR while recording using the unit’s Hold function.

Using the slate tone enables you to easily calibrate the H3-VR and camera audio levels. Use the sound marker to output a tone when recording starts to make syncing audio and video easy.

With the single-knob gain control, you can easily adjust the gains of all four mic capsules simultaneously for accurate, balanced 360-degree audio.

Two AA batteries can power the H3-VR for over 11 hours. For longer shoots, the H3-VR can also use portable USB batteries or be plugged in via an AC adapter.

The H3-VR fits right in with your existing gear, featuring a dedicated line out for a wide range of 360 cameras or other external devices.

Weighing less 5 ounces (120g), the H3-VR is the perfect Ambisonics recorder to take on the go. And since H3-VR records directly to an SD card, there’s no need for external gear.

Monitor your audio live in stereo binaural or use the H3-VR’s onboard Ambisonics Decoding to simulate your recorded 360-experience during playback.

Perfect for live streaming, video conferencing, direct recording and more, the H3-VR’s audio interface mode turns it into a USB 360 mic for your computer or stereo mic for your iOS device

Out of the Shot But in Control

Staying out of the shot can be tricky when recording a 360-degree video, which is why the H3 Control App lets you remotely access transport controls, level settings, and metadata notes right from your iOS device.*

The H3-VR’s companion ZOOM Ambisonics Player software takes the work out of post-production by easily converting your Ambisonics files to Stereo, Binaural, 5.1ch surround and more. Play, trim, re-orientate and export your audio files in minutes.

The above values are approximate.