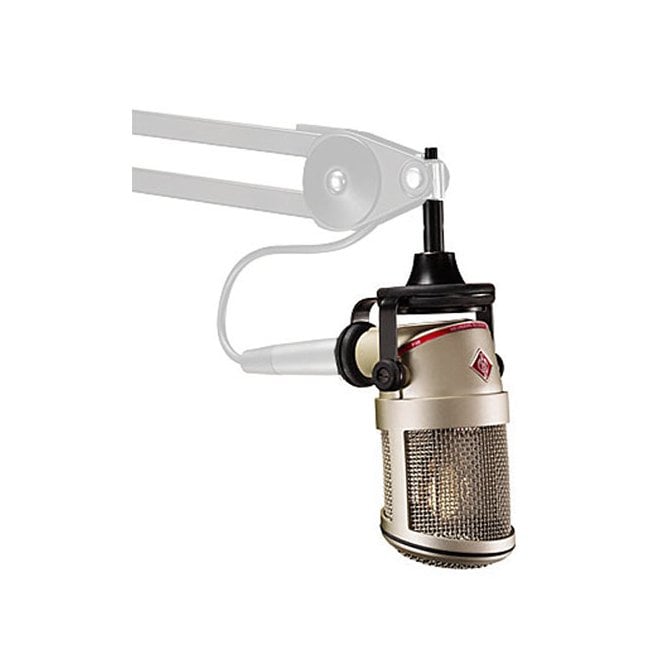 The BCM-104 Large Diaphragm Condenser Broadcast Microphone from Neumann features a large-diaphragm, cardioid condenser capsule. It has a frequency response that is flat up to 3 kHz and then gradually boosted in the higher frequencies. If required, internal switches can be used to compensate for the proximity effect and to reduce the sensitivity by 14 dB.

The microphone headgrille twists off for quick cleaning. In front of the capsule, mounted on a frame holder, a fine gauze serves as a built-in popscreen. The microphone has an elastic mount against structure-borne noise, that is compatible with standard broadcast-segment microphone arms.

The microphone headgrille houses the K 04 large-diaphragm capsule, which has a flat frequency response up to 3 kHz. Higher frequencies have an increased presence up to 2 dB. Since the above-mentioned microphone characteristics are obtained without the use of resonance effects, the microphone features excellent transient response and transmits all transient phenomena of music and speech without any coloration.

A pop screen not only prevents the occurrence of plosive pop noises in vocal recordings, but also efficiently prevents unwanted particles, from respiratory moisture, nicotine, to food remnants, from settling on the diaphragm. The pop screen can be removed for cleaning without the use of tools.

Instead of a transformer to couple the microphone output to the supply voltage, the BCM-104 has an electronic circuit which, like a transformer, provides for good common mode rejection. Interference induced in the balanced modulation line is thus suppressed effectively. With a very low self-noise of 7 dB(A), and an overload capability extending to 138 dB SPL, the BCM-104 has a dynamic range of 131 dB (A-weighted).

The BCM-104 amplifier has a linear operation down to 20 Hz. An active filter efficiently suppresses signals below this frequency. In order to compensate for the proximity effect, an electronic high-pass filter, activated by a switch, is built into the microphone. This filter reduces frequencies below 100 Hz by 12 dB/octave. A 14 dB pre-attenuation switch is provided in order to adjust the sensitivity, if necessary, to circuits designed for dynamic microphones. But this will increase the self-noise accordingly. Both switches are located inside the microphone housing, since they will normally be operated only once, when the broadcasting facility is set up.

The preferred mode of operation is to suspend the BCM-104 from a standard studio boom arm. A thread adapter to fit different connector threads is included. In order to provide protection from structure-borne noise, both the capsule and the microphone in its mount are elastically suspended.