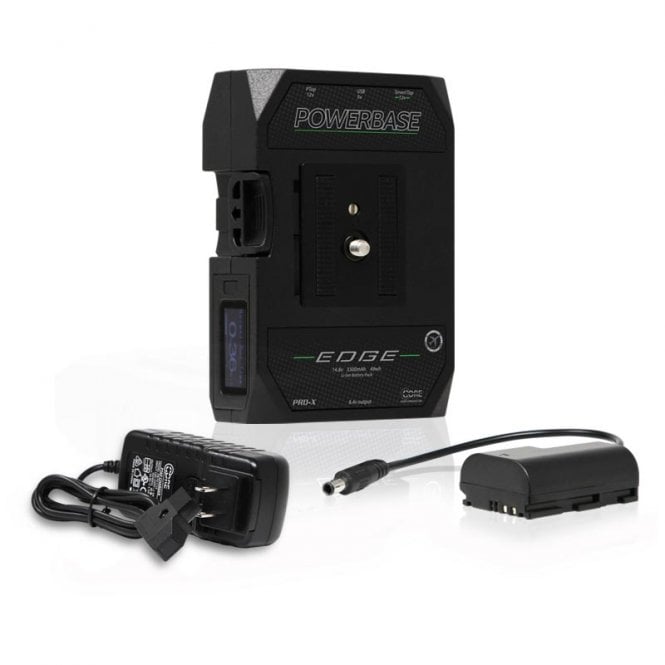 The follow-up to the highly successful Powerbase70, the Powerbase Edge is a feature-rich "small-form" Cine and DSLR pack, in a v-mount form. The 14.8v Lithium Ion pack includes one 8v port to power various cameras, two USB output, and two power tap outputs, one of which being a SmartTap.

The 8v port provides a common power output for the majority of DSLRs and small-form cine cameras on the market which utilize small 7.4v Li-Ion battery packs. There are an assortment of dummy battery cable attachments available which insert into that 8v port. In addition to powering the camera, two on-board powertaps are accessible to power monitors, lights, wireless transmitters, etc. The two available USB ports are a welcoming addition to power/charge mobile devices on the fly, as well as power any 5v accessories(i.e. select audio recorders).

As it is often difficult to approximate runtime when powering the camera as well as multiple devices, the Powerbase Edge has a built-in runtime LCD, to deliver exact battery expectancy to the minute. The LCD also has a button activated backlight to be view-able in any environment. As with it’s predecessor, the Edge has a quick release plate to attach underneath the camera, or quickly attach/detach to a rig or camera cage. It is 30% smaller then the Powerbase 70 yet can still withstand the draw of a full size Cinematic cameras.

The Edge will power the BMD Pocket 4k for 4 hours continually, vs. a standard LPE6 battery pack which only provides 45min, making it a perfect solution for production.