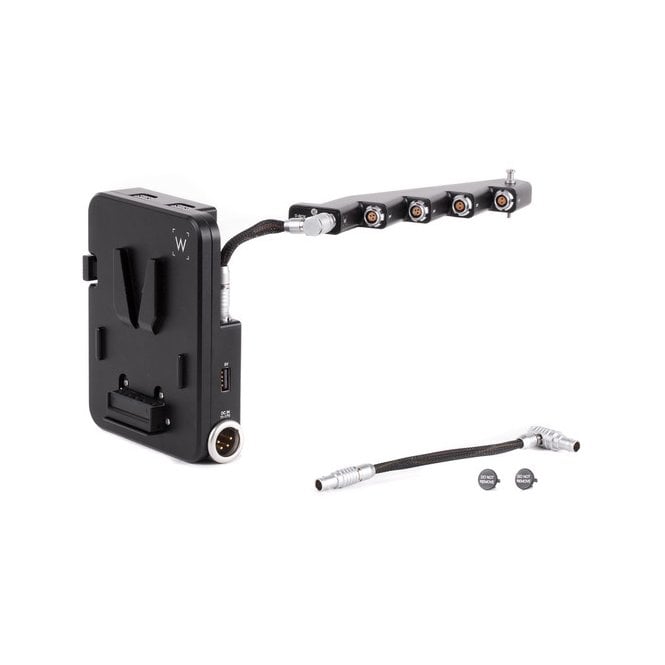 D-Box (Sony Venice, V-Mount) is a custom version of the popular D-Box that adds power distribution, standardized remote start/stop, and hot swap abilities for the Sony Venice camera. The D-Box main unit attaches to the back of the AXS-R7 or to the V-Mount plate on the camera rear and the Power Strip portion attaches to the top right side of the camera via a 3pin Fischer and the tape hook threaded hole.

Connectors on the D-Box Power Strip are contoured to match the camera profile and connector angle which allows for all cables to be installed with no collisions. The module communicates with the camera and allows any ARRI standard start/stop trigger to be used with the 3pin Fischer port including the ARRI UMC-4 / WCU-4. The DC input on the D-Box is the same as the camera's 4pin XLR connector allowing for an AC Power Supply, External Power Plate, or VCLX block battery to be connected to power accessories and camera during a battery change. When both battery and DC input are utilised, the D-Box defaults to the DC input, leaving the onboard battery fully charged.

Physical fuses have been replaced by a processor controlled amp limit which is settable to 3.8, 5.8, or 9 amps using the slide switch on the operator's side. Should the user exceed the set current for accessories, only the accessory outputs are disabled leaving the camera running normally. Once the current load has been reduced by either removing accessories or reconfiguring, the reset button can be pressed to enable accessory power again.