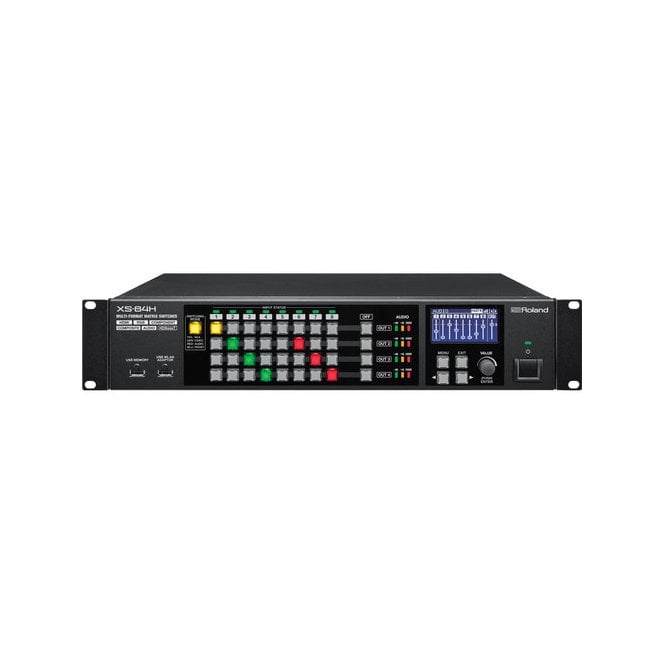 • Enhanced control of settings of PinP windows in multi-mode

• Matrix configuration for the audio mixer

• Support for maximum resolution of WUXGA and 1080p 8 digital inputs and 8 analog inputs 2, 3 or 4 outputs according to the application

• Dissolve transition and PGM/PST mode in Version 2.0 is ideal for live events

The XS series has eight video inputs. In addition to the HDMI port which can pass DVI signals, the series also enables switching for all analog signal formats including RGB, component, composite and S-video.

Using this in combination with the built-in scaling makes creative cropping and orienting of the video possible.

The internal scalers enable the XS series to scale individual HDMI, HD component, RGB, composite and S-video inputs and mix inputs of different resolutions to a common output. Each output can be in their respective format and display.

The series features video processor which enables the composition of the video signal and split-picture in a numerous number of productions. Dissolving transition is possible in Version 2.0. Output format cannot be changed separately when using the composition function.

A internal ducking function enables the ability to have the mic level automatically mixed above any other audio input.

The XS series is equipped with high quality audio effects. Built-in equalizers are included to balance frequencies and eliminate feedback. Each input has a compressor which enables ducking and a lip-sync delay.

The XS series include both HDMI and HDBaseT outputs. When using a LAN cable, up to WUXGA/ 1080p video signal can be transmitted up to 100meters. HDBaseT is a connectivity technology established by the HDBaseT Alliance. HDBaseT enables uncompressed HD video and digital audio signal to be transmitted over a LAN cable. Use of a shielded Cat5e LAN cable is recommended. Transmission distance depends on the quality of the cable.

The series features EDID emulation for HDMI and RGB signals, managing EDID information between the display and HDMI source to ensure a stable system environment for HDMI. Near instant video switching is possible within 0.2 seconds even with HDCP enabled.

Switching and mixing of audio inputs with EQ and dynamics

Resolutions up to WUXGA/1080p are supported for both input and output. Deinterlacing interlaced video for output as a progressive signal is also possible.

All the outputs accommodate HDMI and HDBaseT

Video and Audio signals can be transmitted over a long distance by a LAN cable. Please access the website of the XS series in order to see more connecting verification information of HDBaseT.

Wireless control from an iPad

Using the optional wireless LAN adapter enables direct control from an iPad installed with the dedicated XS-80 Remote app. Along with operating the unit, XS-80 Remote can be used to change settings instantly with its memory-recall function. The operation menu can also be customized by changing the layout, tab names, preset names and channel names or the background picture. Control preset change, video switching and audio level control.

All HDMI inputs and outputs and HDBaseT outputs support HDCP. The XS series can switch HDCP protected video at an extremely fast speed of less than 0.2 seconds thanks to the XS series advanced HDCP key management.