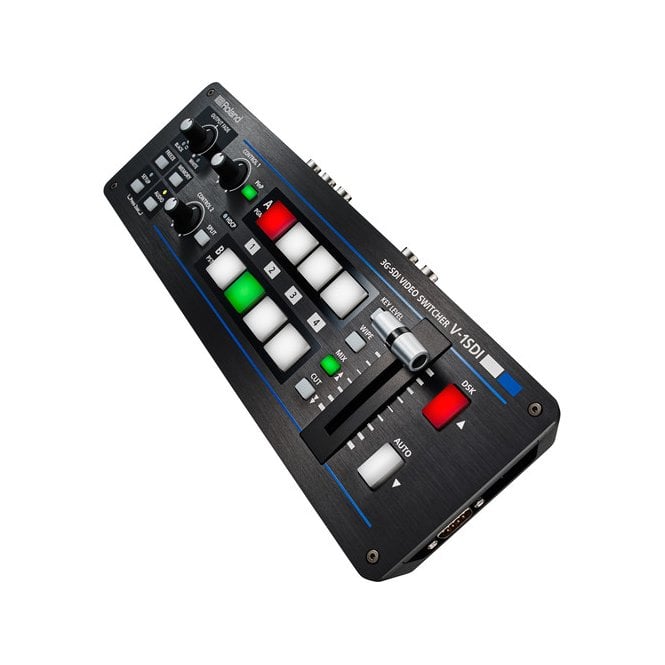 Roland's V-1SDI 4-Channel HD Video Switcher supports HD-only video signals over three of its inputs, and can support SD, HD, and computer video formats up to 1920 x 1200 (WUXGA) at 60 Hz on its fourth. It supports progressive and interlaced material, internally converting the interlaced footage to progressive for processing. Featuring a preview, program, and multiview output, you can easily monitor all your inputs at once on the multiview while isolating your preview and program screens.

The HDMI inputs and multiview output are HDCP compliant, while the SDI inputs and SDI preview and program outputs support SMPTE 424M (SMPTE 425M-AB), 292M, and 259M-C. You can control the unit via the built-in RS-232 port, or via a PC using the USB connection. Eight memory functions enable you to recall specific setups, which makes it easier to get up and running when the switcher is shared among different productions. Built-in features include image freeze and output fades.

The switcher handles four video inputs, up to three SDI and up to two HDMI. Inputs 1 to 3 are SDI, with input 3 shared between SDI and HDMI with support for HD video formats. Input 4 is HDMI-only and, in addition to supporting HD video, also supports SD and computer formats.

The switcher supports analog audio on as well as mic input with or without plug-in power.

This output can display all active inputs on the same screen via the HDMI output.

The built-in memory function allows the memorization and convenient recall of panel settings, such as effect assignment to each button. The memory stores up to eight configurations and keeps stored settings, even with the power off

Fade video to white or black