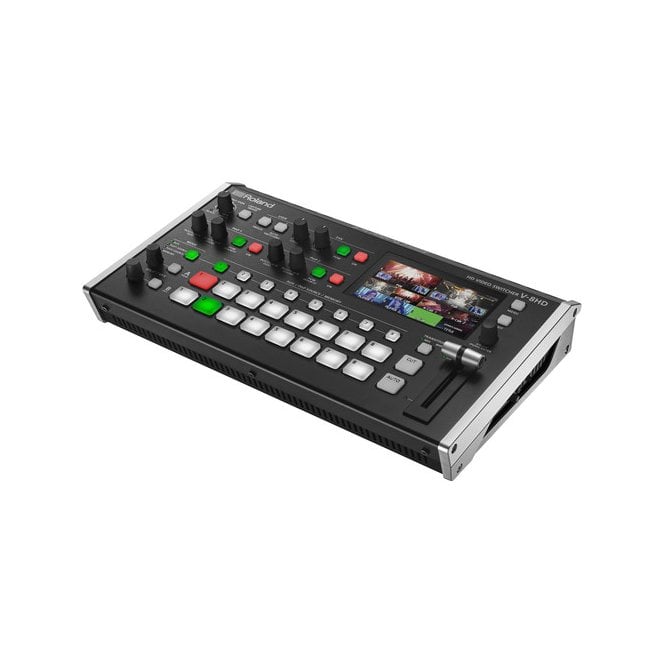 Live events requiring video production require a flexible video switcher like the V-8HD Multi-Format HDMI Video Switcher from Roland. This multi-format video switcher can input up to eight HDMI video sources, switch them, add effects, and output them consistently to screens or projectors. Whether you're switching video for a live presentation or live streaming, the V-8HD has the features necessary for high-quality, live video switching.

The HDMI inputs can accept up to 1080p60 resolution feeds from numerous sources such as media players, computers, professional video cameras, and more. Two of the HDMI inputs utilize internal scaling hardware, which separately scale and/or convert videos of varied resolutions into the selected output resolution, ensuring output consistency between sources. The V-8HD supports numerous effects such as cut, mix, wipe, chroma and luma key, flip, fade, and more. You can also store up to eight .bmp and .png files in internal memory to add images to your effects.

The V-8HD features an 18-channel audio mixer, and up to 24-bit, 48 kHz PCM audio with an effects library that provides gain, de-esser, noise reduction, and more. It also features left-right analog RCA inputs and outputs, as well as a 1/4" TRS headphone output. It also features a 4.3" TFT color LCD which previews each input and program output all on a single screen. On the top of the unit, there are multiple rows of input and output buttons, position, source, and levels buttons, and a fade T-bar, giving you full control of your production within the small, portable frame. You can also remotely control and monitor Atomos recorders to start/stop using a trigger button, so you don't miss a vital record.

While the feature set of the V-8HD is expansive, it is also intuitive and simple to operate after the initial setup. Music venues, houses of worship, streaming media production companies, and convention centers that rely on volunteers or less-experienced technicians can take advantage of the rich feature set and ease of use, with minimal impact on existing infrastructure. You can even pair the switcher with a BOSS single or double footswitch and program over 100 commands, adding to the versatility of the V-8HD.

The V-8HD seamlessly mixes eight HDMI sources with Full HD support, even when the sources have mismatched frame rates and color spaces. And with the built-in scalers on two of the HDMI inputs, you can easily interface with client-provided sources like computers, tablets, smartphones, gaming consoles, and legacy 4:3 devices.

With the V-8HD's eight HDMI inputs and three outputs, you're able to offer clients a vast amount of creative freedom, without increasing the budget.

Set Up Layers, Effects, and Keys

Thanks to its compact footprint, the V-8HD fits effortlessly into any live production environment, even when you have to deal with minimal setup space. And it only weighs around 4 lb, making it easy to carry in a backpack or luggage. With its smart feature set, eight HDMI inputs, built-in 18-channel audio mixer, and support for external battery power, the streamlined V-8HD is a versatile and efficient HDMI switcher.

With the V-8HD, storing and recalling unique looks requires only a few button presses. The eight memory presets and powerful composition effects engine work together to provide a completely seamless load between the different looks.

The V-8HD has assignment buttons for sending any of your connected input devices to a dedicated aux output without affecting the main feed. It's also possible to synchronize the aux output with the program output, giving you a built-in 2x distribution amp.

The V-8HD's bright, 4.3" multiviewer display means less gear to buy and haul to the gig. From a single screen, you can monitor all eight video inputs, PGM, and PVW plus menu overlay. Input windows show camcorder recording status and embedded audio levels. Connect a larger external TV for an immense multiviewer experience, or to make menu changes without moving the focus from the action.

Via HDMI, the V-8HD operator can trigger Atomos recorders to start and stop recording. And some camcorders even display a recording confirmation icon on the input channel of the V-8HD's multiviewer screen, letting you keep an eye on the recording status while staying focused on other critical tasks.

Stomp on a BOSS single or double footswitch to execute over 100 different switcher commands. Cut to a still image, transition PiP on/off the screen, or drop in a keyed lower-third title. It's also possible to switch the aux output between presenter notes and stage manager messages, turn automatic switching mode on/off, and more.