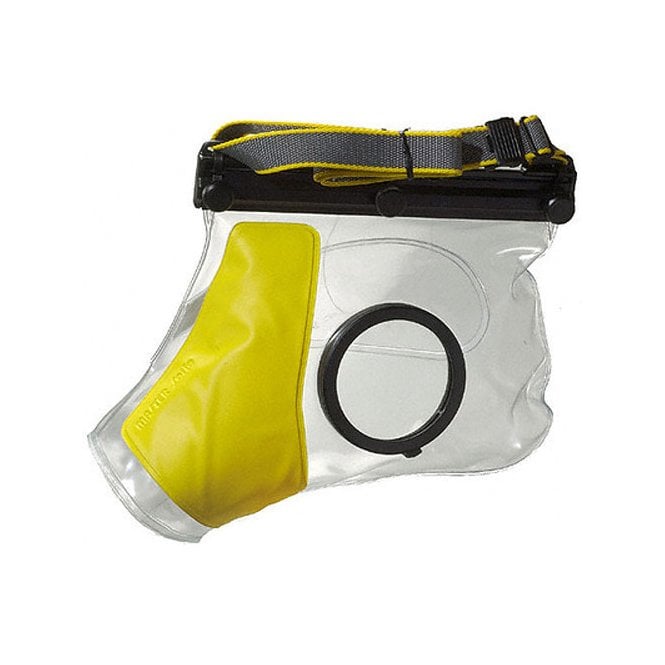 This is the oldest SLR uw-housing in our range, the original version of the U-F dating back to the early seventies. Alas, the current version only shares the basic, external shape with that original version. The material, port, closing rail, glove and basically every other details were subject to the continual improvement process that is part of our manufacturing philosophy and has evolved and improved in numerous iteration over the years.

It is ideal for use on small boats, in the surf, underwater portraits, swimming, snorkeling or diving. It is easy to operate the camera as its various components and buttons can be operated through the PVC. The original U-F SLR underwater housing was desigend at a time when analog film still had to be transported by hand between each shot and autofocus was a concept that was in the realm of science fiction. As a result it has a "glove" to allow acces to the film transport (normally done with the right hand thumb), shutter release and lens control.

Although this unit was designed for analog cameras, a growing number of users with mirrorless system cameras, such as Olympus, Sony and Fuji, have come to appreciate its advantages when it comes to lens operation, especially in underwater portrait photography.

The U-F is designed to fit almost all mechanical, analog SLR cameras without autofocus or automatic film transport, irrespective of the manufacturer or model. With this housing, a whole new world of applications opens up for your standard camera: Inside the housing you can now take the camera safely canoeing, snorkeling or even diving, up to a depth of 10 m / 30 ft. The limiting factor is caused solely due to operating difficulties of the hand in the glove below this depth.