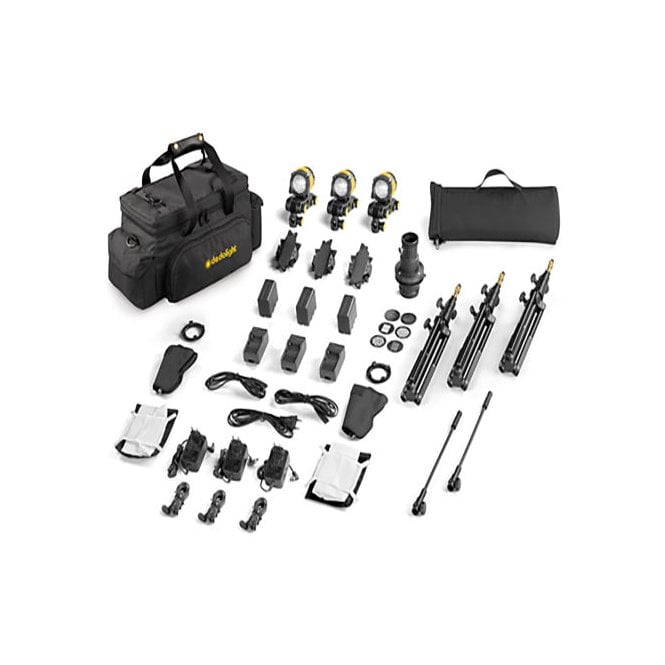 Including three focusing LED lights, along with a host of essential accessories and components, the DLED2.1-D Mini 3-Light LED Kit from Dedolight offers versatile daylight-balanced continuous light with an array of tools for operation and control.

The three DLED2.1-D lights feature a high CRI of >91 along with a focusing mechanism to provide a 1:7 flood to spot ration, with a beam angle of 5-50° and 5250 lux in spot mode. Its 5600K daylight balance is ideal for outdoor lighting and location and ENG applications. Three included battery shoes accept NP-F-type lithium-ion batteries for power or, alternatively, AC power supplies with dedicated extension cables are also included for mains power operation. For controlling the light output, this kit also sees the inclusion of standard eight-leaf barndoors for each of the lights, as well as two softboxes with speed rings. A projection attachment with a 60mm f/2.4 lens is also included, for producing areas of light with a controllable edge quality, along with a gobo set and holder. Finally, the kit also incorporates a stand kit with three light stands, extensions, and a stand bag, as well as a soft bag for protecting the lights themselves during storage or travel.

The Dedolight DLED2.1-D Daylight LED Light Head is a focusable LED light with a high CRI of >91 and a standard 5/8" receptacle and 1 1/8" stud for mounting. This model is daylight-balanced at 5600K for providing a quality light that can be used in a wide range of situations, especially with the ability to focus the beam angle from 50 to 5°. The light is dimmable without any color shift and offers tilt control with adjustable friction.

Being an LED fixture it has exceptionally low power draw of just 25W with an output of 5250 lux at a distance of 3' with a spot beam angle. Accessories can easily be fitted on a 2.3" diameter holder and the light features passive cooling, meaning it doesn't require noisy fans to run. It also is lightweight at 1.8 lb for effective use as an on-camera light.

These Standard 8-Leaf Barndoors for DLED2.1 LED Lamp Head from Dedolight helps control and contour this fixture's beam spread. While the barndoors don't rotate around the head, the 8 fanning leaves are nearly as effective as the rotating version.

Compatible with both daylight and bi-color versions of the light, the Universal Imager Projection Attachment without Lens for DLED2.1 LED Light from Dedolight allows you to project unfocused or sharply focused optional gobo patterns, slides or an optical spot of various diameters using an optional iris. This attachment ships without a lens to give you a choice of optional 30, 50, 60 and 85mm lenses to cover wide angle to telephoto requirements.

This Gobo Holder from Dedolight is designed to hold size 'S' steel gobos and is dedicated to the DP1S Universal Projection Imager Attachment. It is a replacement item for the one originally included with the DP1S.

This 6 Gobo Set from Dedolight features a variety of lighting effect gobos that are designed to work with the DP1S Projection Attachment/Imager.

Dedicated to the Dedolight DLED2.1 LED fixture, this Softbox with Speed Ring helps to diffuse the quality of light for a softer overall appearance. Both a removable internal baffle and front diffuser are included for greater control over the light quality, and the dedicated DLSR60 Speed Ring attaches directly to the fixture for simple mounting of the light modifier.

This 16.0' Extension Cable from Dedolight is designed for use with the DLPS12-30 power supply.

The Dedolight 7.2 Li-Ion battery for DLOBML is one of many possible power sources for Dedolight's Ledzilla DLOBML (DedoLight On Board Mini LED), a tiny but powerful on-camera LED light. This 7.2V lithium-ion battery will power the DLOBML for up to 330 minutes (or more if the light is dimmed to less than 100%).

The Dedolight Charger for NP-F Batteries is designed to charge the DLB-NPF550 (105-minute run-time) and DLB-NPF950 (330-minute run-time) 7.2 lithium-ion batteries for the Dedolight Ledzilla DLOBML On Board Mini LED (not included), a tiny, high-output on-camera focusing LED light that draws just 8W of power. The charger operates on 100-240VAC.

Designed for the DLB-NPF550 and DLB-NPF950 7.2 lithium-ion batteries for the DLOBML DedoLight On Board Mini LED light

This Dedolight DSCS Soft Case for Lithium Batteries and Battery Plates is a soft case designed to accommodate Lithium-ion batteries and battery plates for Dedolight power supplies. It features a carry handle.

Ideally suited for travel applications and working on location, the black 48.5" DSTM Mini Light Stand from Dedolight is a compact aluminum stand measuring 15.75" when collapsed. It weighs 1.4 lb.

The 15.7" Dedolight Flexible Stand Extension works with the DST stand, the CLAMP1 or any 5/8" stud. The extension can be bent in any direction - even S-shaped configurations. It's particularly useful as backlight stand, where its flexibility allows you to easily hide a light behind your subject.