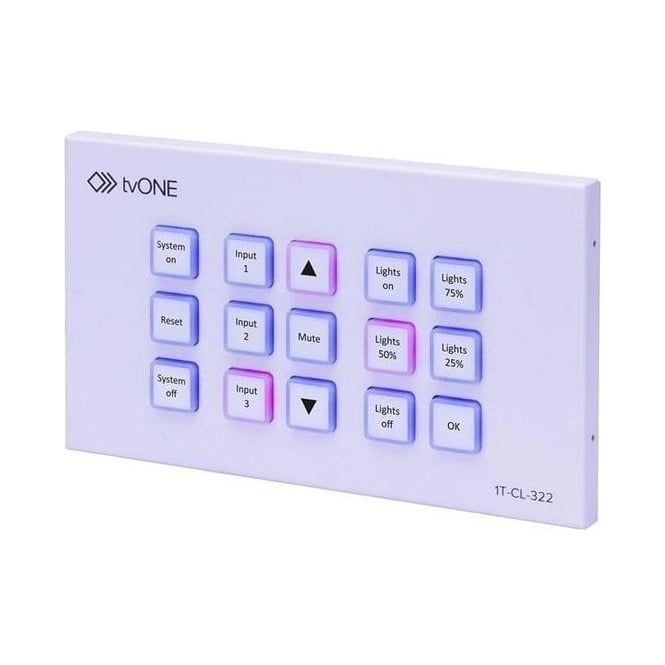 The 1T-CL-322-EU Control Panel is an easy to use cost effective Ethernet based solution for system automation and remote control. It is designed to be highly flexible but simple to install for both experienced system integrators and the smart home user.

The control panel consists of 15 LED backlit buttons, each programmable for either a single function or for recalling a sequence of commands in a macro. Each macro can be executed with a single button push, recalling up to 16 of the 128 stored commands, allowing the user to create and easily recall complex scenes or presets.

The unit controls equipment via a single Ethernet port which can be set to Static or DHCP. PoE (Power over Ethernet) is supported which allows for greater flexibility in system design and installation. In addition to the Ethernet port, 2 relay outputs can be used to trigger mechanical devices such as motorised curtains, screens or projector hoists adding another level of environmental control.

Time and date scheduling is supported allowing the user to fully automate their system, adding control where technical supervision is not available. This could be used for powering the system on and off or changing a scene setting. LED button logic can be configured to add a level of feedback to the user. Programming and configuration of the 1T-CL-322 is done through simple but flexible WebUI, allowing the administrator to manage the control panels functions remotely across a network. A panel emulator allows the programmer to verify functionality and remote system control in real time, this can also be useful for remote system management.

The WebUI is supported by a discovery application (1T-CL-SW) that can be installed onto a PC and allows the administrator to search for and configure all connected 1T-CL-322 control panels on their network.

Supports up to 128-commands

Up to 15-macros each containing up to 16-commands