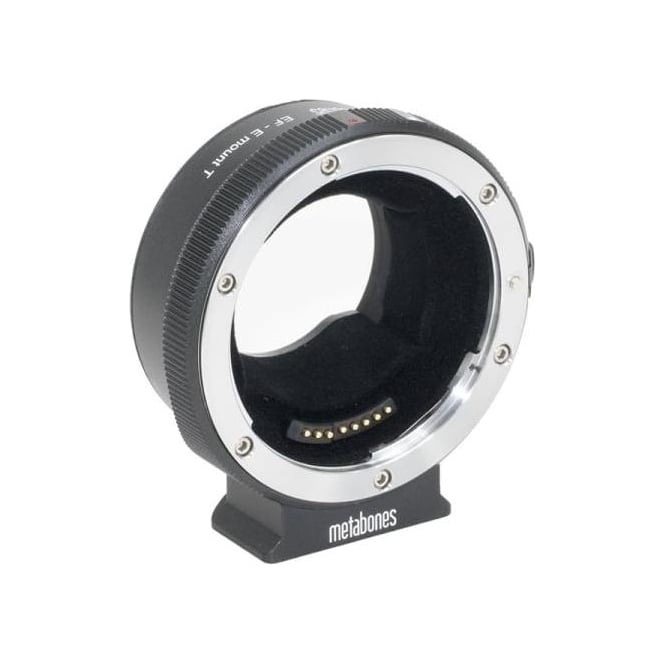 AF-C tracking during high speed drive at up to 10fps on Sony A9.

Custom function button (called Focus Hold button) assignable to more than 50 functions, such as Aperture Preview and Eye-AF, on A9, A7 series, A6500 and A6300.

Fast contrast-detection AF on all E-mount cameras (except AF-S/DMF with Sony A9).

Distance and zoom display on VG and FS series camcorders, A9, A7 series, A6500 and A6300 (lens with distance information support required).

Felt material flocked inside the opening to reduce internal reflection.

Fits both EF and EF-S lenses. (Vignetting at corners may occur with certain EF-S lenses because they are designed to cover a 1.6x crop image circle but Sony APS-C has a 1.5x crop factor.)

Unless otherwise noted, continuous AF and video AF are not supported. (Functional, but performance may be unsatisfactory.)

AF may not work if the maximum aperture of the lens plus any EF Extender or other teleconverter attached is smaller than f/8.

Autofocus may have difficultly locking onto subjects which are very close to the nearest focusing distance of the lens.

Sony E-mount 1.4x TC (model SEL14TC) will fit and work but AF performance may be unsatisfactory and there may be significant vignetting with some telephoto lenses.

Autofocus accuracy depends heavily on the design and working condition of the lens. Lenses with hidden problems which may not be apparent on Canon DSLRs will lead to inaccurate and unreliable autofocus on Sony. Typical problems of this kind that we have seen include an unsmooth/erratic autofocus mechanism (e.g. getting stuck intermittently at a certain focusing distance), a faulty/worn-out distance encoder or other faulty/worn-out internal sensors.

No support for lens corrections such as peripheral shading, CA and distortion.

Some EF-mount lenses may make audible noises during iris changes and autofocus, wich may be picked up by the built-in microphone of the camera during video recording. Use of an external microphone is advised. Some of the recently-introduced Canon-brand lenses are very quiet, however.

Fast AF on all E-mount cameras (phase detection AF only with Sony A9)
* with smooth iris support
Tested by the community
Phase-detect AF on A9, A7RII, A7II, A6500 and A6300 only, unable to contrast-detect AF accurately if at all
Manual focus only
Not supported

Note colour dot next to the words "Made in Japan" on the housing. Blue dot, which is the latest version, is preferred. May have compatibility issues when Kenko is used with certain lenses. Stacking not supported except if both are the blue dot version.