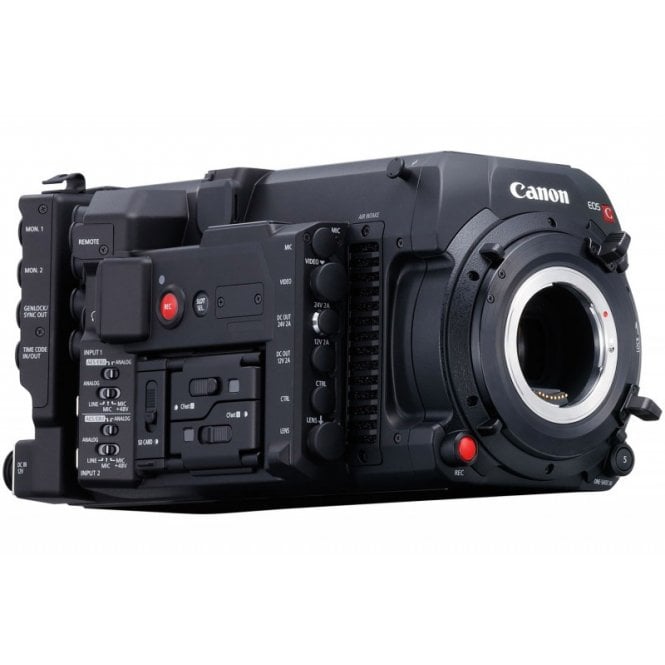 Put Canon's mastery of image processing into a cinema-grade production-ready form factor and you get the EOS C700 PL Cinema Camera. This version of the C700 comes stocked with an ARRI PL lens mount, opening up a wealth of compatible vintage and modern cinema lens options. Furthermore, the 12-o'clock position of the PL mount is home to the Cooke /i lens interface, which passes lens information, such as aperture, focal length, and focus distance in real-time from compatible lenses for electronic display as well as metadata useful in VFX workflows. Beyond the lens mount is the first stop in the C700's imaging pipeline, the 4.5K CMOS image sensor. With a physical resolution exceeding that of DCI 4K and a dynamic range of approximately 15 stops, the C700 is ready for today's 4K and HDR productions.

What good is a sensor without the processing technology to back it up? The C700 is capable of 4K recording at 60p to CFast 2.0 cards using the XF-AVC format. Also available are Apple's well-regarded ProRes formats for direct-to-edit workflows. Raw recording is another possibility through Canon's separately available Codex Digital Recorder which simply clips onto the rear of the C700's modular design.

While the C700 is a fairly advanced piece of equipment, Canon has implemented a familiar user interface. Most basic functions can be accessed through the six buttons surrounding the screen. More advanced settings can be found using the simple selection dial and set buttons.

I/O options for nearly any application can be found on the C700's side panel. Video, audio, control, and power inputs and outputs are available for implementations ranging from ENG-style run-and-gun to high-budget cinema productions.

While the C700 is a production powerhouse all on its own, its modular design lets the user customize the form factor to fit their use case. The rectangular body has enough real-estate to be shoulder-mounted for handheld shooting or secured to a dovetail on professional grip equipment with ease. And for the first time on a Cinema EOS camera, native V-mount battery support is available via an installed IDX battery plate.

IP streaming support lets users stream video online in real-time as they shoot. The C700 can connect with compatible IP decoders, IP streaming software and other devices, either through the on-board Ethernet connection or with a separately available Wi-Fi adapter, to enable live streaming to video websites or news programs within an existing video production and editing workflow, such as at a broadcast station.