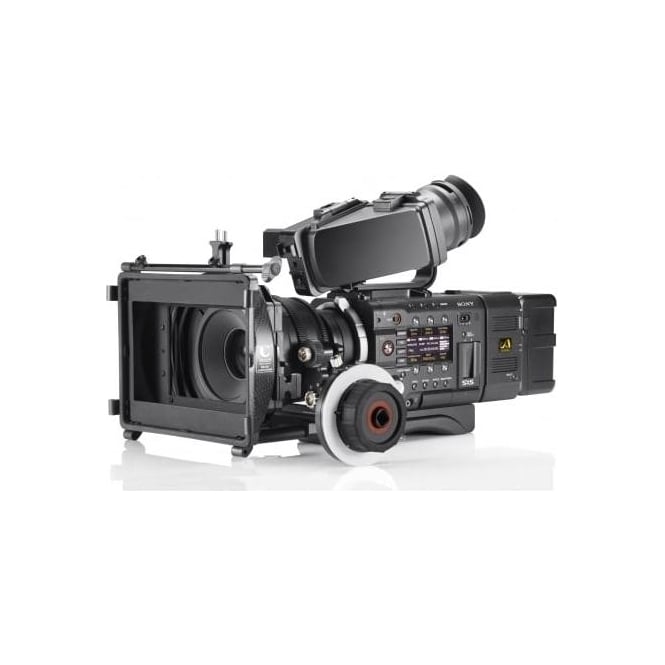 The Sony PMW-F55 CineAlta 4K Digital Cinema Camera features an 8.9MP Super 35mm image sensor, capable of capturing 4K, 2K and HD resolution video in a variety of formats via the camera's internal recorder. The F55 is among the first digital motion picture cameras with a global shutter, which completely eliminates motion skew and other "rolling" shutter distortions. Sony has designed the F55 as the foundation of an exceptionally versatile, modular system.

Optional components¹ of the F55 system include bolt-on recording units, a series of digital viewfinders, and camera support rigs. Notably, the AXS-R5 recorder¹ can be mounted onto the rear of the F55, enabling 4K and 2K 16-bit RAW recording and high speed frame rates of up to 240 fps in 2K². In keeping with Sony's mandate on versatility, the F55 will have a native FZ-mount, which will provide an interface for Sony's SCL-Z18x140³ auto focus servo zoom lens as well as a wide range of lens adapters, such as the included PL-mount adapter.

Many digital sensors can match and even surpass traditional motion picture film for resolution and low light image quality, but with approximately 14.3 stops of dynamic range, film has maintained an advantage over most digital sensors. However, the F55's exposure latitude is rated at 14 stops of dynamic range, for truly film-like rendering of highlights and shadows. Moreover, the F55 incorporates the same color filter array technology used in Sony's flagship F65, for a color gamut that is even wider than motion picture film.

On-board 4K recording requires high-data rate recording media, and the F55 will use Sony's newly developed SxS PRO+ memory cards. A 128 GB card will provide enough space for approximately 40 minutes of 4K video in the XAVC Intra 422 format. SxS PRO+ cards will also allow on-board recording of 2K video at up to 180 frames per second² as well as SStP 4:4:4 at 440 Mbps when set to RGB.