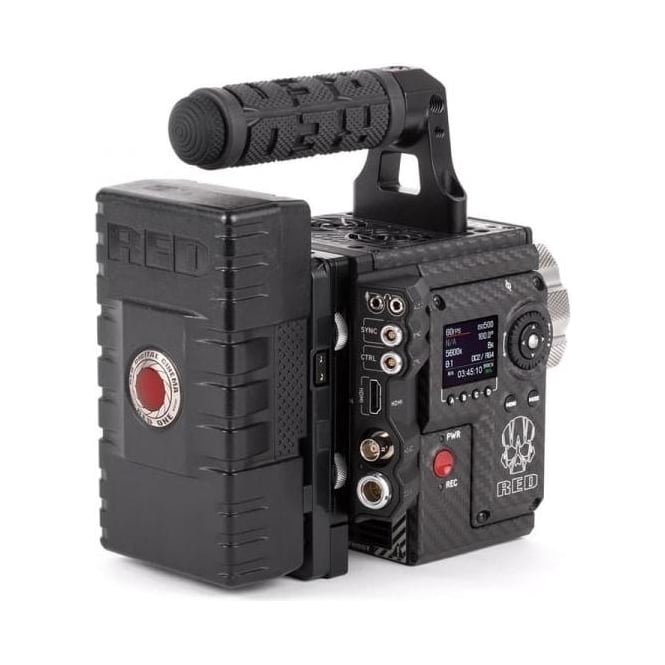 Cable-less V-Mount system for the RED Weapon, Epic Weapon (Epic-W), Scarlet Weapon (Scarlet-W), and Raven cameras which utilizes an IDX brand plate with two D-Taps and the Wooden Camera pogo interface module. The assembly will attach without tools directly to the back of the RED Weapon/Scarlet-W/Epic-W/Raven camera, Base Expander Module, REDVolt Expander Module, and some third party modules like OMODs.

This system can be converted between high and low modes. High mode is where the battery plate sits above the back of the camera. Low mode is where the plate is configured to be flush with the top of the camera body leaving batteries in a very compact configuration. An important note is that the RED DSMC2 top handle will clear RED Brick batteries when our Cable-less V-Mount plate is configured in low mode.

When using Cable-less and D-Box battery modules it is important to know what amount of power your batteries are capable of providing. A RED Brick battery can supply up to 10A with the camera generally consuming 4-6A in standard configuration. Although the remaining power is available from the D-Taps, Fischers, etc., it is best to limit the power draw to 4A or less for best results. Consuming more power than a battery is capable of providing will cause the battery to shut itself off, killing the camera and accessory power.