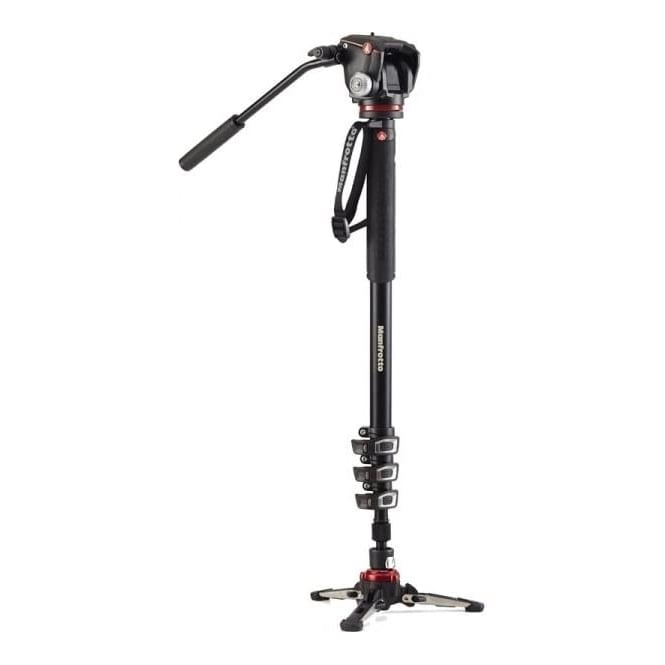 The new XPRO Monopod Aluminium 4-section with 2 Way Head is a professional full fluid video monopod made to satisfy videographers who leverage the height of their monopod to get above crowds and to achieve a wide range of shooting angles. These state-of-the-art Manfrotto legs have inherited the perfect combination of rigidity and locking safety of professional tripod ranges like the 190 collection and 055 collection.

This monopod is equipped with Manfrotto’s full fluid base (MVMXPROBASE) featuring the innovative FLUIDTECH system that makes Manfrotto XPRO Monopod+ the first of its kind on the market to feature 3D fluidity. The FLUIDTECH video base enables the ultimate shooting smoothness on pan, tilt and swivel for an expanded range of perspectives. The three retractable feet make it extremely portable when folded and allow the monopod to be easily carried everywhere.

The XPRO fluid head is a lightweight video head featuring a fluidity selector that makes it possible to switch between hard and soft fluidity according to the preferred speed of tilt movement and to the kind of gear used. Its Adapto Technopolymer and Aluminium body make the XPRO fluid head extremely easy to carry: weighing a mere 0.7 kg and supporting up to 4 kg of payload, it introduces a new design approach that enhances video head transportability. The head comes with the Manfrotto 200PL plate, the most widespread photographic plate, which guarantees a quick setup and a quick switch from photo to video.