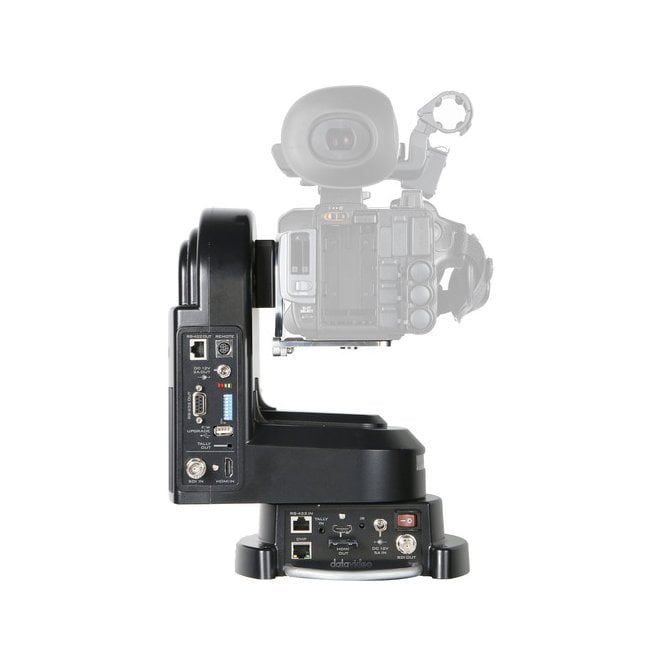 The Robotic Pan and Tilt Head from Datavideo is a compact, flexible robotic head designed for lighter video cameras. The PTR-10 head enables shooters to choose the most suitable camera and lens for their production, rather than being restricted to the limits of a single PTZ camera. The head can be mounted on a tripod or on a wall, ceiling, or surface.

The PTR-10 features HDMI and SDI input and output, as well as serial connections for various control protocols. The head can also be managed with a web interface via its Ethernet port. You can remotely control the unit using IR controllers, VISCA protocol controllers, the Datavideo RMC-180 camera controller, RMC-280 TVS controller, with serial from up to 3900' away, and via Ethernet (DVIP). It can seamlessly integrate with block cameras such as the BC-50, 80, 100, or 200, and it can integrate its tracking information into the TVS-2000A virtual studio.

The PTR-10 features continuously variable speed control over pan and tilt axes. Weighing only 6 lb with a payload capacity of 6.6 lb, it is compatible with a wide range of PTZ cameras and servo zooms. The head has a pan range of 340°, a tilt range of +/- 90°, and a pan/tilt speed of 0.1 to 20° per second. The PTR-10 also has a built-in tally light which is a must for live productions.