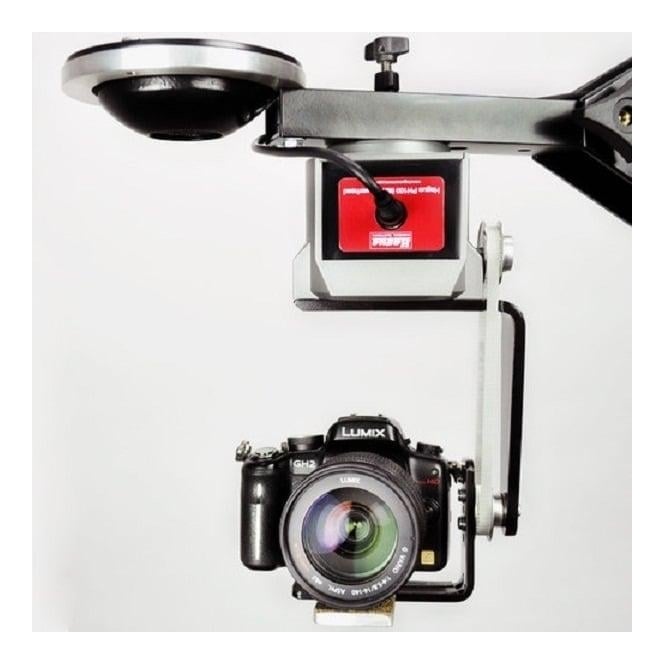 The Powerhead can be mounted to a tripod, jib, crane, beam or wall bracket either vertically or underslung and it supports up to 1kg. It is supplied with a control box which allows the user to adjust the speed and direction of the head with the capability to pan & tilt through 360°.

The Hague PH100 Powerhead will pan and tilt through 360 degrees, this enables the camera to point directly up or down as required. It is powered by two powerful geared motors, with the camera’s tilt being belt driven, and this ensures the head provides a very smooth movement with minimum backlash.

The camera plate on the tilt drive has three mounting positions for the different sizes of camera which enables the camera to be correctly balanced. With all DSLR cameras it is essential that they are correctly balanced, and this can be more difficult depending upon the lens used, so we would recommend the BCP Balance Correction Plate which is listed as a related product below.

The speed of movement is variable, from the slowest crawl up to 24 degrees per second (0 to 4RPM). The drive motors are reasonably quiet, but will be heard if the camera’s onboard microphone is used in quiet locations (similar to most powerheads on the market). The Head can be mounted to a tripod, jib or wall bracket and it has a standard ¼” threaded hole in its base.  A ¼” stud with locking wing nut is also supplied to enable the head to be mounted to a beam or Jib.

The Hague Control Box has two variable speed control knobs which give the head a precision pan and tilt movement in either direction, from a slow crawl up to the required speed. You can also pan and tilt simultaneously. The head is powered by a rechargeable internal battery, which enables the power head to be used anywhere without the need of a power supply. Alternatively an optional external battery (ideal to have in reserve) or MA100 mains adaptor could be used to power the head.