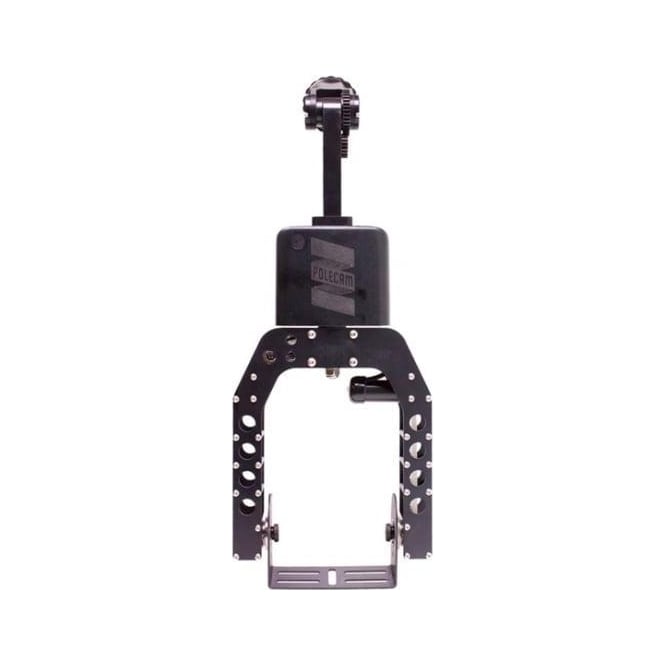 Polecam's all new electronic hot head is a versatile remote control pan/tilt unit for either on Polecam use or as a stand alone remote hot head.

To facilitate unlimited panning the Narrow Head has power and monitoring options built in via slip rings on the head. A power tap (Hirose), monitoring (BNC) and an iris drive connection (4-pin binder) are provided.

The Narrow Head is designed with flexibility in mind and you can detach the Polecam mounting bracket drop arm (4 screws) and that will reveal a 3/8 UNC threaded plate screwed to the drop arm, remove this and screw it to the top of the Narrow Head. Attach the inverted head to whatever suits your intended use.

The main difference between the Wide and Narrow head is the use of different gearboxes and gearing.

The Narrow Head maximum pan speed is 2x faster than the Wide Head so it completes a 360 degree pan in 2.75 seconds. The slowest Pan speed is 360 degrees in 15 minutes which is about 15 times slower that the older Polecam heads.

The Narrow Head uses a 12 bit PID motion controller to regulate the pan and tilt axis via a closed loop configuration meaning you get an extremely accurate and easily controllable head. The ramp up and down feature reduces violent head movement for smoother operation and we have a new feature called motor braking enabled when there's no joystick input.

The Narrow Head is designed with flexibility in mind