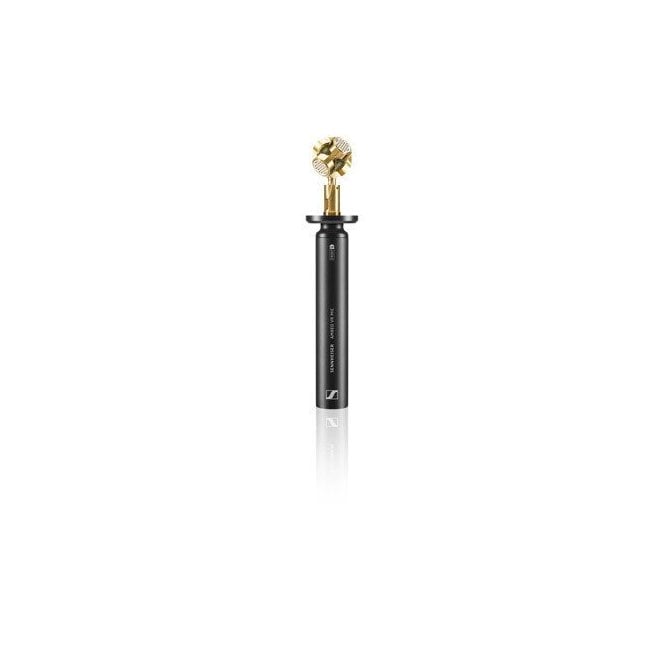 The Sennheiser AMBEO VR is a microphone intended to bring the full vision of VR content creators to life in all its four-channel glory. Indeed, the microphone utilizes four KE 14 capsules situated in a tetrahedral arrangement to ensure that from wherever you're standing, the AMBEO will record the surrounding audio in a spherical manner, resulting in true Ambisonics recordings.

The science behind these principles is a bit arduous to lay out in the space provided for this description (indeed, multiple dissertations have been written about the Ambisonics format—developed by the British National Research Development Council in the 1970s); the principles are, however, of interest to the VR community, which utilize the technique to capture truly immerse aspects of any given sonic picture, giving you the left, right, bottom, top and center of the image in a way especially suited to the VR experience.

To help in working with the resulting audio in post-production, the microphone comes with a format encoder that will work in AU, AAX, VST, and standalone formats. Also included are a Rycote suspension mount, a split-cable designed to connect the microphone to four separate XLR terminations, and a windshield.

Especially designed for 360° spatial audio recording, the easy-to-use AMBEO® VR Mic is an ambisonic microphone fitted with four matched KE 14 capsules in a tetrahedral arrangement. This special design allows you to capture the surrounding sound from one single point. As a result you get fully spherical ambisonics sound to match your VR video/spherical 360 content.

A jewel in your high-end VR sound chain

The AMBEO VR Mic is meant to work together with specialized high-end software and hardware. Ideal companions for the AMBEO VR Mic are, for example, field recorders like the Zoom F8, digital audio workstations like the Avid Pro Tools HD or the Cockos Reaper and binaural decoders e. g. from Noise Makers. Output is possible via HMD, VR Game Engine or 360° Social Media platforms.

Ambisonics - Technology for you to shape the future of audio

Ambisonics is a multi-channel technique that lets you spherically capture the sound arriving from all directions, at a single point in space. For playback this representation is rendered binaurally, allowing you to virtually rotate the orientation of the perspective in all directions, horizontally and vertically.

Ambisonics is supported by all of the major post-production and playback tools on the market today. This makes ambisonics the appropriate tool for Virtual Reality and all other applications involving 3D sound. A tool to create new worlds of sound with.

Benefit from a design developed with you in mind

By means of the VR Creators Program Sennheiser made sure to involve the professionals of the industry in the realization of the AMBEO® VR Mic right from the beginning. Thus, we developed a comprehensive product package including many well-conceived accessories that allow for a smooth workflow ¬– not least the A-B encoder software that works as a plugin, which can be seamless embedded in your post-production process.

The capsules of the Sennheiser AMBEO VR Mic deliver A-format, a raw 4-channel output that has to be converted into a new set of 4 channels, the Ambisonics B-format. This is done by the specifically designed Sennheiser AMBEO A-B format converter plugin, which is available as free download for VST, AU and AAX format for your preferred Digital Audio Workstation for both PC and Mac. B-format is a W, X, Y, Z representation of the sound field around the microphone. W being the sum of all 4 capsules, whereas X, Y and Z are three virtual bi-directional microphone patterns representing front/back, left/right and up/down. Thus, any direction from the microphone can be auditioned by the listener during playback of