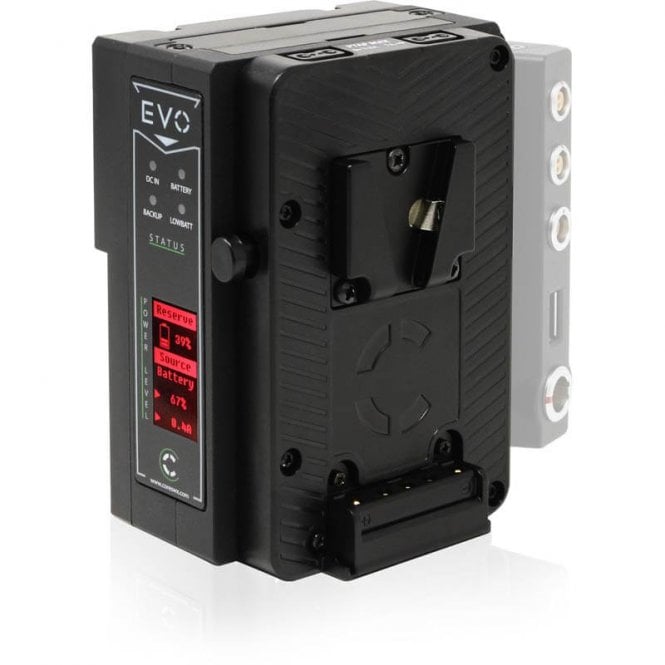 The JetPack EVO is the next generation of the Jetpack series. Larger sensor cameras require more power, as well as a bevy of on-board accessories with additional power requirements. Increase power consumption requires additional battery exchanges throughout a production. The EVO reduces downtime with a built in battery pack, capable of handling up to 15A draw for 5 minutes; enough time to do a battery swap. In addition to the backup function, the EVO has a “boost,” or battery assist function should your on-board pack be unable to handle the startup current necessary.

A 4-cell Lithium Ion cartridge was designed to handle the power consumption needs, and is situated between Jetpack camera attachment and front battery mount plate. The replaceable cartridge system insures future functionality even after the cartridge’s battery cells start declining.

In addition to battery backup and boost functions, the EVO has a backlit LCD which monitors power source, backup battery status, and the current load your camera system is consuming.

For additional power distribution, the EVO comes standard with two powertaps, but also accepts a variety of modules built for the system. The modules are available in different (configurations) with outputs including two 2-pin LEMO regulated 12v, as well as 3-pin Fischer 24v. The outputs are mechanically engineered to not obstruct connections on a RED DSMC2 Pro I/O module. Modules, depending on type, also have a USB5v and 6-pin LEMO power input should you have available power supply or battery block power accessible.