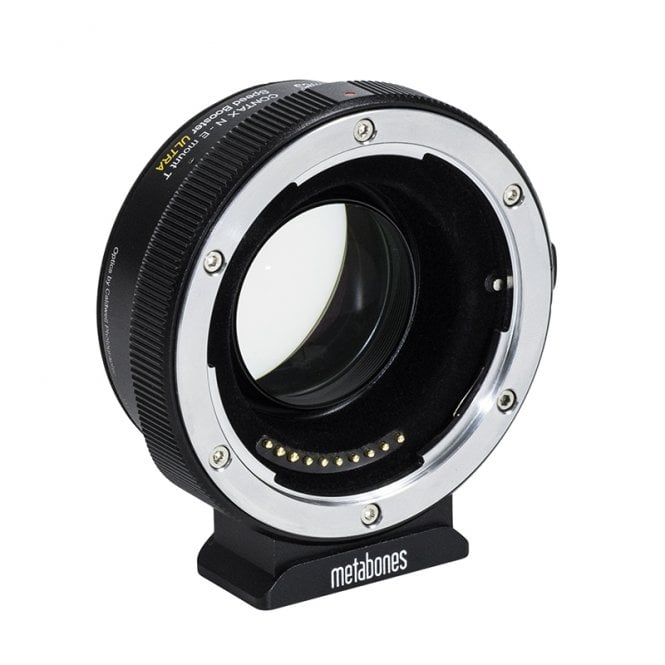 Owners of legendary Carl Zeiss optics in Contax N-Mount have long demanded a trusted migration path to mirrorless cameras. With the advent of Metabones® Contax N-Mount to Sony E-Mount Smart Adapter, the longing is over.

Get a glimpse of the ergonomic experience of the original Contax N1 camera by using the lens' own aperture ring in aperture priority and manual exposure modes on A9, A7 series, A6500 and A6300. Fully automatic exposure and shutter priority are also available.

The workmanship and attention to detail are evident from the signature Metabones design and the two electrical contacts carrying power, which are thicker in the same way as a genuine Contax N series autofocus camera. The inside of the adapter is flocked with felt to minimize internal reflection. A tripod foot compatible with Arca-Swiss style quick release is included.

Metabones has a proven track record of firmware stability and timely firmware support. Firmware is user-upgradable via the adapter's micro USB port.

Contax made history by offering the world's first full-frame digital camera, Contax N-Digital, in 2002. All Contax products had been discontinued by 2005, leaving some of the finest autofocus optics ever made in search of a successor. None of these lenses feature optical image stabilization, and this is where the 5-axis in-body image stabilization (SteadyShot INSIDE) of Sony A9, A7 Mark III series, A7 Mark II series and A6500 comes in as a much-needed complement.

The heritage lives on, with the very same Carl Zeiss lenses from the dawn of full-frame digital photography now leveraging the latest and greatest mirrorless camera features and poised to benefit from further technological advances in the future.

Speed Booster® ULTRA uses an advanced 5-element/4-group optical design by Caldwell Photographic Inc., incorporating ultra-high index tantalum-based optical glass to achieve extraordinary optical performance with improved corner sharpness, distortion and reduced vignetting. Speed Booster® ULTRA has a magnification of 0.71x,  effectively reducing the crop factor of APS-C cameras from 1.5x to 1.07x. The Speed Booster® ULTRA design makes very effective use of exotic materials at the furthest limit of glassmaking technology, and as a result is well corrected for use with virtually all full-frame SLR lenses regardless of exit pupil distance. Thus, the Speed Booster ULTRA performs extremely well with professional-grade f/2.8 zoom lenses such as the Carl Zeiss Vario-Sonnar T*2,8/17-35. Similarly, high-speed fixed focal length lenses such as the Carl Zeiss Planar T* 1,4/50 and Carl Zeiss Planar T* 1,4/85 will be transformed into f/1.0 lenses with excellent contrast and resolution from the center all the way to the edges of the image. Like all Metabones Speed Boosters, the Speed Booster ULTRA is optimized to fully account for the camera’s filter stack located near the sensor surface. This is especially critical at the extremely large apertures made possible by Speed Booster technology. As a result of this careful optimization, the complete range of Contax N and Contax 645 lenses will function flawlessly when adapted to Sony E-mount APS-C format camera bodies. (Speed Booster ULTRA cannot be used to adapt a Contax 645 lens to a full-frame E-Mount camera such as the A9 and the A7 series.)