X
This site uses cookies to provide and improve your shopping experience. By continuing to use this site, you agree to accept these cookies.
For more information, please see our Cookies Page
More Info
Accept Cookies
Call: +44(0) 208 397 1407
Email: sales@digibroadcast.com
Rated 4.97 / 5 trustedshops.co.uk
Sell Your Gear Find Out More ›
FAQ s 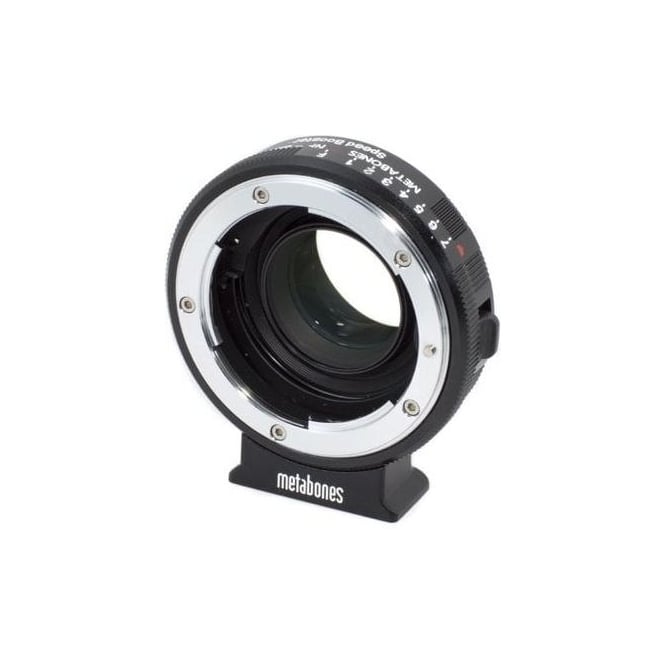 The Nikon G Lens to Blackmagic 2.5k Cinema Camera with Micro-4/3 Mount Speed Booster from Metabones allows a Nikon G lens to be mounted to a 2.5k Cinema Camera and in doing so, increases the angle of view and the maximum aperture.

The Speed Booster uses 6-element optical design that incorporates ultra-high index glass to achieve ideal optical performance at the largest apertures. It increases the maximum aperture by 1 1/3 stops with a maximum aperture of f/0.8, and reduces the crop factor from 2.39x to 1.53x.

The Speed Booster not only increases the field of view and lens speed, it also increases the lens' MTF, or how faithfully the lens transfers detail from the object to the camera sensor. These increases in MTF are seen in the corners as well as the center of the images.

Built into the Speed Booster is a clickless aperture ring, a must-have feature for cinematographers, as well as a removable Arca-type compatible tripod mount.