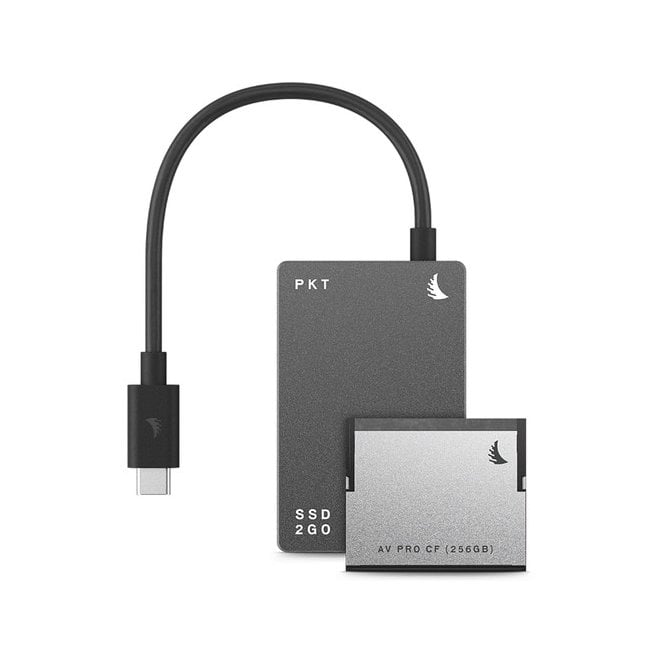 The graphite gray 512GB SSD2go PKT USB 3.1 Type-C External Solid State Drive from Anglebird is a small portable solid-state drive for users on-the-go. It features a hard anodized surface and because solid-state drives have no moving parts, it's more resistant to physical impact and vibration than regular hard drives. Access and transfer files quickly with sequential read speeds of up to 560 MB/s, sequential write speeds of up to 500 MB/s, sustained read speeds of up to 540 MB/s, and sequential write speeds of up to 480 MB/s. In addition, it will work with Windows, Mac, Linux, and Android, and connects to your system via a USB 3.1 Gen 2 Type-C interface that supports data transfer rates of up to 10 Gb/s. While the SSD2go PKT is equipped with a USB Type-C interface and includes a USB Type-C cable, it also includes a USB Type-C to Type-A cable, allowing it to be used with devices that are compatible with USB Type-A. Additionally, it is also backwards compatible with Thunderbolt 3, USB 3.1 Gen 1, USB 2.0.

This drive uses Grade A MLC NAND and features overload protection, TRIM and SMART support (depending on the OS), and EMS and ESD protection. Additionally, features an access time of ~ 0.5 ms and an MTBF of 2.4 million hours. This SSD is bus powered, meaning that it requires no external power supplies and is ideal for users who need fast performance in a pocket-sized form factor. Also included is an activation code for the full limited warranty and additional free software licenses and content. To receive the full limited warranty, the product needs to be registered on the Angelbird Personal Service Portal within 30 days after purchase.

The 256GB AV Pro CF CFast 2.0 Memory Card from Angelbird is designed for use with Atomos, Blackmagic Design, Phantom, Canon, Hasselblad, and other devices that are compatible with the CFast 2.0 standard, which utilizes the SATA III 6 Gb/s interface. It features sustained read speeds of up to 530 MB/s, sustained write speeds of up to 430 MB/s, Stable Stream technology, over provisioning of ~7.6%, TRIM, EDC/ECC for data reliability, EMS protection, a built-in cache, SMART technology, an MTBF of 2.4 million hours.